International Men's Day is an opportunity for people everywhere to appreciate and celebrate the men in their lives and the contribution they make at work, in their communities, and at home. To mark the day, Stuart Taylor, Head of Engineering and Software Testing Practice at BPDTS, shares his experience as a parent fighting to get the help his autistic son needs and deserves. 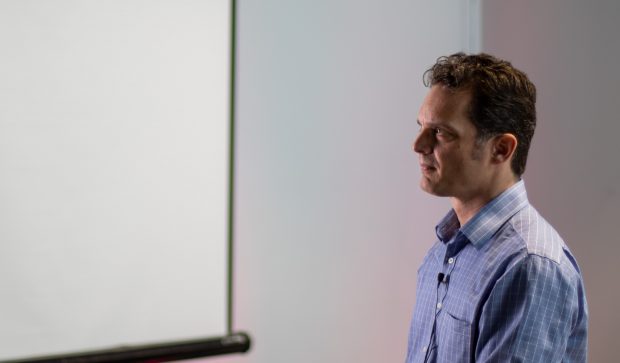 My son was born after what can only be described as a brutal ordeal lasting 2 days; had the torture my wife endured not been at the hands of NHS midwives and doctors, it could have been the scene of a gruesome horror movie.

As my son let out a cry for the first time that morning, I realised two things.

As my son, Dylan, stared back up at me, I thought 'what the hell am I going to do?'

Both scary and joyful in equal measure, I could feel an enormous weight settle on my shoulders. I was responsible for another human being in a way that I had never experienced before. My father hadn't been much of a role model. He and my mother divorced when I was 10 years old, and he hadn't featured in my life.

We often hear people talk about imposter syndrome, a feeling someone gets, that they are faking it, or making it up as they go along. I got my first taste of imposter syndrome later that day when the midwife told me to bathe my son, and if that wasn't scary enough, she invited the 10 new dads on the ward to come and watch how to do it. My son wasn't even a day old, and I now had to put him in water, with an audience!

Fast forward a few years, and I've begun to notice some differences in my son compared to other children. Subtle differences that doctors and teachers dismissed as me being a neurotic parent. My son started flicking his ear as if swatting a fly. He didn't play with other children so much as play alongside them. He didn't like to be hugged, and he didn't seek out a hug or cuddle. He started asking me if he was weird.

Standing out (in the corridor)

My son revealed he had to change into his Physical Education kit in the corridor as all and sundry walked past him. His teacher told me it was because he was too slow; he needed to have more 'oomph'.  In hindsight, I should have wiped the floor with the teacher. Instead of helping him, she was 'making an example of him'.  However, as I have learned, teachers are (generally speaking) not equipped to recognise or appropriately handle the tell-tale signs.

He had begun reading, but he was having some difficulties, and I suggested to my wife that he might have dyslexia. I wasn't diagnosed with dyslexia until later in life, and I recognised some of the things with which he struggled. The teachers dismissed the dyslexia idea. But, I also noticed my son shielded his eyes in bright light. We made an appointment with an ophthalmic specialist who diagnosed an eye condition. The specialist gently suggested the condition often went hand in hand with other conditions we might want to investigate.

Again, the GP dismissed us as neurotic parents, and my son continued to struggle in school. The school screened my son for dyslexia and while not a full diagnostic report, the report suggested that he was severely dyslexic, and we have him appropriately diagnosed. Following this advice, we had our son checked by a dyslexia specialist who provided a comprehensive report that showed our son's dyslexia was affecting his working memory, his language skills, his mathematics skills and his organisational skills.

Fortuitously we moved to a new house and changed GP in the process. The new GP didn't hesitate to refer us to the Children's and Adolescent Mental Health Service (CAMHS). After about 18 months of waiting, they suggested our son was autistic, but that further diagnosis was needed.

Our son was finally diagnosed as having Autism Spectrum Disorder (Asperger), but high functioning. To the casual observer, he looks perfectly normal, if not a bit shy or timid. Many people hear the word Autism and think Rain Man. Autism is often described as a spectrum, although in reality, it's more of a vector or polar plot than a spectral plot and no two autistic people are ever the same.

Teenage years are an emotional roller coaster for almost everyone involved. Still, when you are a high functioning teenager, and you are very aware of your differences as well as the physical and physiological changes you go through, it's made all the more difficult.

Children with Autism have a higher incidence of anxiety, depression and suicidal tendencies. Last October, our son suffered from what has been described as an Autistic Burnout. He had tried to mask his differences for so long, in what he found to be a high anxiety-inducing environment (high school), he shut down. He became non-communicative, wouldn't come out of his bedroom, stopped eating. I felt utterly useless once again. I was his parent, and I didn't know what to do.

My wife and I engaged an Educational Psychologist, and she was the one who identified that it was the masking and trying to fit in and appear normal that had caused the burnout. She suspected our son had some sensory difficulties that were a contributory factor in this and suggested that we seek the opinion of an Occupational Therapist.

I sat in the sterile environment of a CAMHS interview room while a psychologist asked my son about his mood. She asked him if he had tried to self-harm or had thoughts of taking his own life. He told them, without emotion or embellishment that he honestly thought it would be best if he could disappear and while he hadn't tried to self-harm, he understood why others might do it. I was heartbroken.

Lego and walking; a long way back to reconnect

My son has a lot, a ridiculous amount of Lego. For almost 10 years, every birthday and Christmas has brought many Lego sets. Some, still complete and built, while others had long been broken down into their individual pieces.  In January, in an attempt to reconnect with my son, give him something to focus on, and give him a sense of achievement, I brought all of the Lego down from his room and commandeered the dining room as a Lego build room.

For several weeks we sorted the pieces. First by colour, then by type. Slowly, my son began to reengage with me. I was aware that he hadn't stepped outside of the house for 4 months, so I asked him to walk the dog with me. He refused at first, then late one afternoon (this is in January when it's dark at 5 pm) he agreed to go with me as 'it was dark'.

Those first few walks were long and silent. He didn't speak, not a word. Then, one day, without prompting, he began talking, and he didn't stop. I should state here that I've never been able to have a back-and-forth conversation with my son. He tends to monologue about something he is interested in, in great detail ad nauseum. I was so happy to hear him talk; I let him.

One smile; a thousand miles

We approached the Occupational Therapist that had been recommended to us by the Educational Psychologist and arranged for a sensory assessment just a month before COVID lockdown part one. We had a struggle trying to get our son into the car, but eventually, we made it to the assessment centre and after a shorter battle, got him out of the car and inside.

The Occupational Therapist immediately recognised that he was extremely anxious and set up a 'therapy' hammock for Dylan. A therapy hammock is made from many sheets of soft Lycra-like material, that hugs and cocoons you as you lie in it. He lay there swaying, gently from side to side and for the first time in 5 months, he smiled. I finally breathed out, unaware that I'd been holding my breath ever since that day he said he wanted to disappear.

Dylan has multiple sensory differences, but he didn't know how to seek out something to help him regulate. Many children like to and seek out the swings or roundabout or hang upside down on the monkey bars at the playground. These actions are all helping the child regulate their vestibular senses. At home, they may tumble or rollover, or sit upside down while watching TV; it's something they seek out to help them regulate. Dylan needed a hammock; he just didn't know it.

Battling for every inch of progress

Two weeks ago, Dylan started at a specialist school for high functioning, Autistic teenagers. He's not alone; he is among a peer group who all have similar needs, similar anxieties and the school is equipped (including a sensory hammock) and trained to help him. It's taken a year to get him that school place. All my annual leave this year has gone on meetings to fight for my son, to get him what he needs so that he can flourish.

Every day brings a new parental challenge, and every day I think: